With a shock and disbelief I watched the events from Washington D.C. that were unfolding on January 6th 2021. I was shocked because I came to this country more than 30 years ago, believing that this was the "perfect union", open to people of all origins, races and beliefs. I came with my own set of prejudices that were quickly challenged by the diverse interactions of New York City, and later by the experience of moving to Florida.

In 2008 I watched with hope and pride when the first African-American president was elected, hoping that one of the last  barriers was broken. It was disturbing and disheartening to see the exploding racism, hate, xenophobia and homophobia of the following years, which culminated in the four years of Trump's presidency. I saw close friends falling into the abyss of that hate, becoming openly racist, denying others the same rights and privileges that they enjoy every day.

Yesterday was the culmination of this process: hate was on full display, hate for anything different, unfamiliar...

One of the most striking images from the events of the last day was this picture from the Capitol: 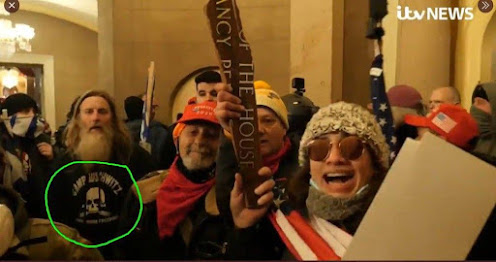 I visited Auschwitz twice in my teenage years, both times being completely devastated. The experience of seeing what mankind is capable of in the name of ideology is lasting and hard to overcome. And yet, this is the image from the US Capitol, a glorification of one the most disturbing and heinous crimes against humanity in our history. This is not someone deep in the woods, living the life of hate: this is someone surrounded by others in the moment. This is someone whose actions are being whitewashed by politicians and Trump supporters on  line and in real life even after the desecration of democracy we have all witnessed yesterday. I fear more dark days like that in the future. They will be with us until we are all unified in condemning not only separate acts of violence like the one we witnessed yesterday, but the entire culture of hate, racism, homophobia and xenophobia that still exists all around us.

Finally, I would like to end this rant with the words from a friend. He posted it on Facebook as a reaction to what had happened yesterday. As much as I can try to understand minority experiences in this country, I realize that I come from a privileged background (white male) and it will never be possible for me to see all the large and small injustices faced daily by those communities. His words speak to me and give me pause to make another small step to a better and more just world:

I watched many people condemn Kap kneeling and BLM protests over the summer but they had nothing to say yesterday... I watched folks cry that their freedom was taken away because they had to wear a mask. Yesterday you got to see first hand what your privilege looks like, and unsurprisingly you’re still in denial If you believe protesting police brutality is the same as an attempted coup, that is encouraged by the president.... you’re part of the problem If you see folks stating this was ANTIFA dressed up as Trump supporters (when trump encouraged this) and you don’t refute, you’re part of the problem Yesterday was exactly what Trump meant when he said “stand back and stand by”, but you still voted for him... you’re to blame for yesterday (miss me with economic reasons because folks used that in the 1860s as well) Brown / black folks would have been mowed down the minute they stepped foot on the Capitol steps.. Trump supporters talking about they’re tired of double standards! 😂 My parents had to eat at segregated restaurants and my dad was called boy even when he was serving in the USMC. You do not know what double standards are!! And yes you’re part of the problem Yesterday wasn’t surprising ... Trump’s political career kicked off by questioning the citizenship of Obama, yet you were ok with it.... You are part of the problem We are tired of this BS!!! If you want America to heal she needs to acknowledge her original sins and so do you!! This is what’s stoking all the fear and hate